President Uhuru Kenyatta has called on Singapore and other Asian countries to invest in the Big Four agenda that includes affordable housing, food security, manufacturing, and universal health coverage.

The two leaders agreed to boost trade and cooperation between Kenya and the Asian nation.

President Kenyatta particularly called for investments in Kenya’s plan to build new metropolitan areas and to expand existing ones in a plan to build 500,000 new housing units and their attendant-supporting infrastructure by 2022.

He also called on Singaporean investors to partner with Kenya in the expansion of the agriculture sector and processing through new technologies and techniques.

President Kenyatta, who is on a visit to attend the Singapore Summit 2019, said Kenya and Singapore have led the way in developing Afro-Asian relations.

The Singapore Summit started in 2012, is one of the foremost events that brings together business and thought leaders from Asia and around the world to discuss global trends in business and geopolitics. President Kenyatta is the keynote speaker at the event.

President Kenyatta said Kenya looks at Singapore as a “role model for what can be achieved through conscientious planning, diligent execution of people-centric policies, and the unwavering commitment to eliminating graft and inefficiency.”

“Taking heed of the examples set by Singapore and other nations that have emerged from low-income nation status, Kenya has embarked on a transformative agenda to turn our country into a newly industrializing middle-income country by the year 2030, through the implementation of the Kenya Vision 2030,” said the President.

The President said his Administration has picked four main areas from the Vision 2030 to increase its focus in the short-term.

He cited the recent hosting in Nairobi of the first Afro-Asian Fintech Festival, which was co-sponsored by the Central Bank of Kenya and its Singaporean equivalent — the Monetary Authority of Singapore.

He noted that in June 2018, the Enterprise Singapore Overseas Office was launched in Nairobi to promote trade between the two countries. 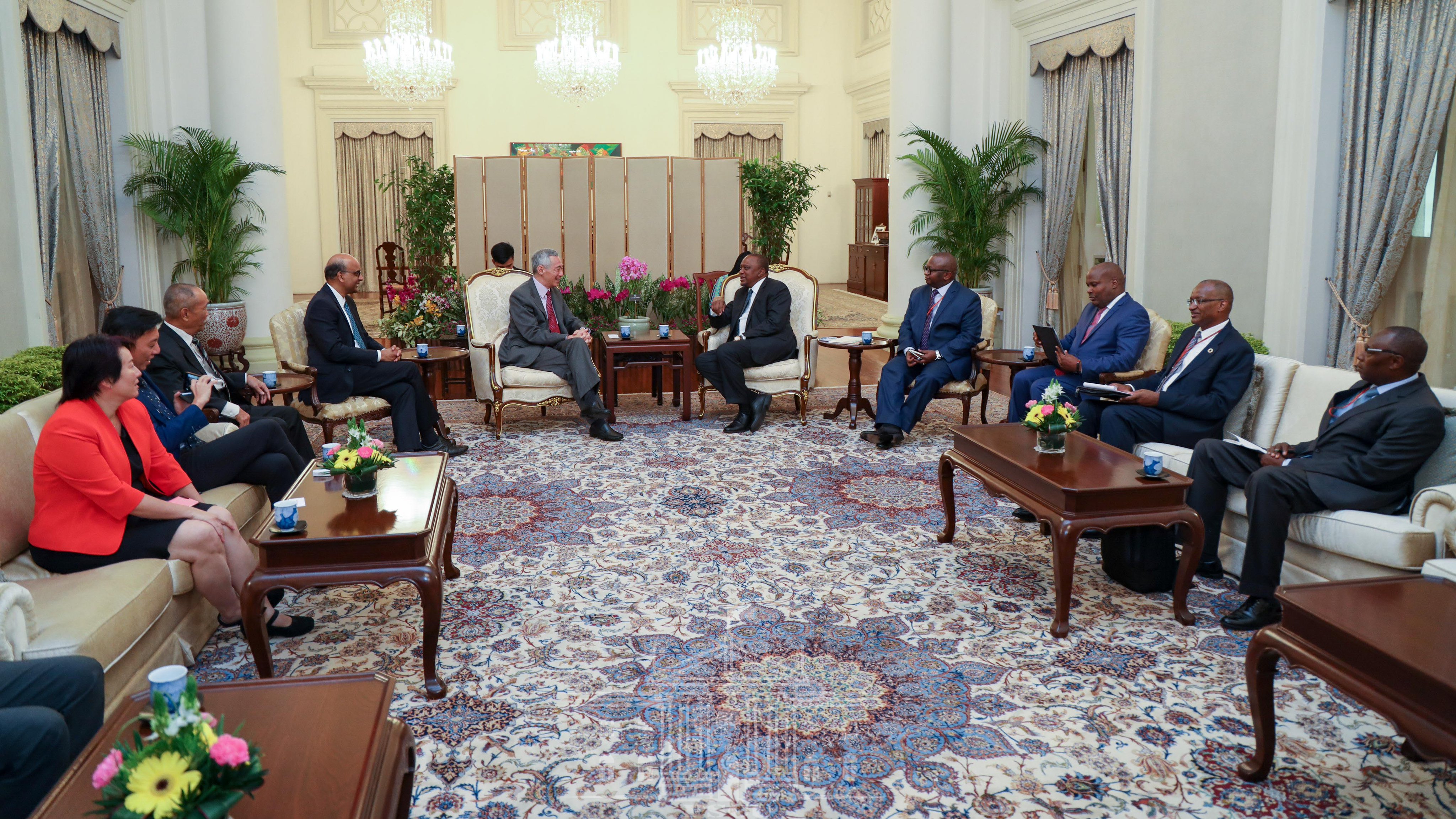 “To Singapore, Asia and the rest of the World, our nation’s message is: Kenya is open for business and investment for players with a strategic interest in tapping into one of Africa’s fastest-growing economies as well as the enormous potential of the entire Eastern and Central Africa Region,” Uhuru said.

He further proposed the establishment of a Joint Trade Committee to enhance bilateral trade and investment ties.

Prime Minister Lee said Singapore is keen on increasing its cooperation with Kenya and was also interested in learning from Kenya’s experience in harnessing mobile money technology to enhance economic inclusion.

PM Lee said Singapore will support Kenya in improving the efficiency of its ports as the East African nation positions itself to serve the eastern and central African region effectively.

Although Kenya and Singapore declared independent from Britain in 1963, there is a gaping difference between the two countries.

In 1963, when Kenya got independence, and Singapore merged with Malaysia, Kenya’s GDP was $926.6 million while Singapore’s was $917.2 million.

In 1978, when Jomo Kenyatta, the founding president of Kenya died, Kenya’s GDP had grown to $5.3 billion, but had been surpassed by Singapore whose GDP then had grown to $8.06 billion.

By 2013, as the son of the Founding Father, Uhuru, took power, he was managing an economy of only $55.24 billion while Singapore whopping $297.9 billion economy.